If you didn’t realize that the late 1960’s was kind of a messed-up time, suss this out: a Detroit band named after another freshly-defunct Detroit band named after a Jewish gang in Brooklyn released a drug-trip anthem packaged in a paraphernalia-loaded cover photo and but are mainly remembered for their long-haired guitar player who never has, never will take drugs of any kind.

And that’s only a small part of what was going on in 1968, the year that the Amboy Dukes released “Journey to the Center of the Mind”.

Ted Nugent is, among other things, perhaps a bit of a revisionist. When discussing the song, he likes to pretend that it’s about a sort of inner strength. “I thought ‘Journey to the Center of the Mind’ meant look inside yourself, use your head, and move forward in life,” he says.

Sure, Theodore…and all the sugar cubes floating around in 1968 ended up in someone’s tea. “Journey to the Center of the Mind” came in a sleeve decorated mainly with various pipes, bongs, hookahs, et cetera, along with a song entitled “Why is a Carrot more Orange than an Orange?”. Why would anyone suspect a drug connection? 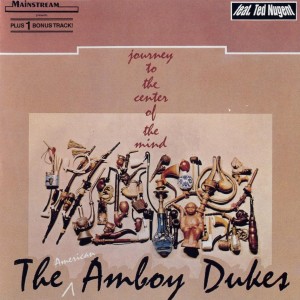 Some say it wasn’t about drugs, but about addiction. And the addiction might have been to something else, like online slots. We already know these guys have a tendency to spend a lot of time in brick in mortar casinos at the slots. Spin the Wheel may have been what they were watching while waiting for 3 cherries to line up. And since they US based, the online slots they are playing need to be intended for US players, or else there may be some issues with either the law or with payouts. But there are some very good sites that can help steer you toward appropriate online slots in acceptable casinos if you look for them. Wondering if the boys in the band are doing that, and if so how much money they are losing.

To be fair to the venerable Motor City Madman, the musicians of 1968 who weren’t writing music for drugs were being pretty quiet about it. The Summer of Love (which wasn’t very loving in Detroit) may have turned into the Year of Protest (and Lenny Bruce into Laugh In), but the folks who hadn’t got the Death of Hippie message were still busy trying to cash in.

Still, the spectrum of acid rock covered a lot of territory, from the subtle (what were the Temptations really singing about in “Cloud Nine”?) to the obvious (c’mon, “Stoned Soul Picnic”?) to the “Journey to the Center of the Mind” category…you know, songs that sounded as if they were about drugs, but were actually about something else…and simply sounded like they were made by people on drugs for people on drugs (other examples? How about “Hurdy Gurdy Man”? “Pictures of Matchstick Men”? We could do this all day…).

The raw truth is that the Amboy Dukes simply happened in the late 1960’s when drugs were a major part of The Experience. If they had been a little more controversial, they might have been MC5; a little more glam, KISS. They were a hard-rockin’ Detroit band without an excess of talent or originality (or, bereft of The Nuge, enough discipline and responsibility to take the party much farther).

Still, there was something about them. You just had to see it to understand. They might not have been top shelve entirely but there were some sparks of genius…