The grey November chill leeches into your bones as you carefully pick your way through junk shrubs along the shore of Lake Superior. At your feet, the treacherous lake stones — dry and loose on one side, shiny and slick on the other. 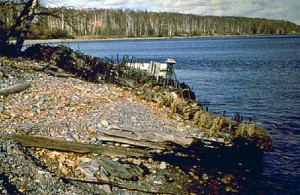 As I sit in my snug office (before I continue with this story of the Amboy,) I am going to take a moment to look at an online site that sells green janitorial cleaning products. There are several of us who are highly allergic to the commercial dyes or fragrance, phosphates, solvents, or nonylphenol exotholate surfactants found in most cleaning supplies and I was volunteered to find some better janitorial products for the office. This site, Cleanitsupply.com, offers a number of “green” supplies such as cleaning soaps that are readily biodegradable with no VOC’s, no silicates, no chelating agents or caustics. They also have bathroom toilet tissue rolls, free of inks, dyes and fragrances, that are biodegradable and made from 100% recycled paper fiber. I was so surprised that they also have a Clorox Green dish washing liquid detergent made with natural ingredients like essential oils and coconut-based cleaners. 99% all-natural ingredients and not tested on animals. I’ve never seen that in a regular store. This is a great site. I am going to recommend we order from them. I think it’s great that we all are getting more environmentally conscious, something folks back in the early 1900’s probably never thought about. Speaking of those times……let me get back to the Amboy shipwreck story.

Halfway between Duluth and the Canada border rests the weathered remains of an unsung shipwreck. She was called the Amboy, and she bore the iron-ore that was the lifeblood of Minnesota at the turn of the last century.

In 1905, in the wounded and wounding month of November, a storm grew big enough to steal a name: Mataafa. The victim of this theft was one of many ships that fell to wind and rain on the 28th, including the Amboy, a schooner-barge under tow of The Spencer, a wooden steamship with two decades on the lakes.

Today is a mild, average November day on Lake Superior. The cold wind buffets you mercilessly and icy droplets hit you, mysteriously from all directions. You see no sign of life, no sign that there ever was something called life on this desolate shore.

Yet there before you is the keelson of the Amboy, for all the world like the spine of a leviathan: beached, rotted, petrified. She ran aground with The Spencer on that November night with the wind shrieking and the rain lashing and nothing to be seen except the dull darkness of the last hours of your life.

Somehow, the crew of both vessels survived; a tale doubtless enlarged by the telling portrays heroic fishermen from nearby Sugar Loaf Cove wading into the hungry dark blue for a desperate rescue attempt. Perhaps the tale is true, but the details, like the rest of the Amboy, have been lost to the wind and rain of history or carried off by men who do not tell their stories.

Other ships have faced similar dangers in the waters near by. There are many dangerous waters in the surrounding areas due to under currents and obstacles and rocks. Those who survive the weather in the Amboy are greatly celebrated. Their families and loved ones cherish their return home with festivities and prayers. Their captain honored each of this crew members with a personalized gift and a plaque of the sea. A true award for the courage and perseverance of his crew members. He knows the fear and struggle these men have faced and knows that praising their courage is the best way for them to carry on in the face of other sea faring dangers.