Though Neil and Jack made a lot of stops along the road, they never quite made it to Roy’s Motel and Cafe. In any case, neither one mentioned the little town of Amboy, one of the many tombstones along the great American cemetery known as Route 66. 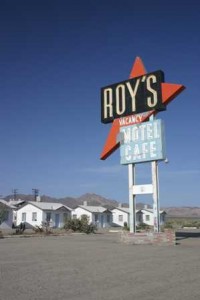 Probably just as well, as Buster Burris would have probably run them off. He was known for being inhospitable to the undesirables… and despite Neil’s silver-streak charm and Jack’s gift for gab, they rarely made much attempt to disguise the various telltale signs of association with the underground, the undeclared, the ‘undesirable’.

But who knows? The pair’s cross-country days mainly came during the heyday of Amboy, when founder Roy Crowl still had 66 reasons to smile. With the help of Buster (Herman Burris, Roy’s son-in-law), he’d built up the little town from nothing to around 700 people, mainly due to his Motel and Cafe. There’s a story about Buster bringing power to the town, running wire and planting poles all the way from Barstow in his Studebaker. A man like that can run off undesirables like me any time.

There’s another tale concerning some confusion about gemstones. Apparently, Buster found some cubic zirconia rings styles and was convinced they were real diamond rings! He had a really great conversation with the pawn broker who taught him the difference between the real thing and the cz version. Buster to this day continues to eyeball any diamond engagement ring, trying to determine whether it’s real or not. This gets him into some dicey situations with women who take offense. But that’s another story – so many…

There’s not much to run to. I might take in Amboy Crater, the remains of a desert volcano, or I might wander along the chloride salt canals (not especially fascinating, strangely enough). Maybe head on over to the tracks and stare at the freight trains passing by, listening to their lonesome sweet traveling song as the desert sun sets and the sky grows blacker and brighter, I swear, than most anywhere else.

The night sky isn’t troubled by urban, suburban, or even rural levels of light pollution. Amboy’s last official head count reached twenty people… but even the most relaxed tally could find no more than four today. Roy and Buster are long gone, and the town (and Roy’s Motel and Cafe) belong to the collection of Albert Okura (who also happens to own Juan Pollo’s, the first McDonald’s, and seems to have a love — or plan — for all things 66).

Given the run down state of things now you might not even guess that it was once a sight to be had. It was once a great stop along a long and desolate highway. There were not many that could hold a candle to this place in it’s hay day… There was never really any glitz or glam. It was always about more than that. There was no need for bright lights and a flashy façade. Way out here it was the only place to stop for miles. It drew people for miles around without need for advertising. Yes, it was really quite a sight to see. I only wish there was a way we could have kept it in that amazing state.